CRISIS COMMS IN THE SUEZ CANAL

When a 220,000-tonne container ship blocked the Suez Canal on 23 March, the world watched the crisis unfold online. Social media, video and strategic storytelling were used to manage crisis communications as the major global shipping route came to a halt.

The Ever Given vessel was on route to the Red Sea when the 400m-long and 220,000-tonne ship became lodged on Tuesday 23 March. A major operation ensued while a traffic jam of over three hundred vessels waited close by. It is reported that 12% of global trade passes through the 193km canal connecting the Mediterranean Sea and the Red Sea.

The Suez Canal is a vital point of trade access and national pride in Egypt, but for the first twelve hours following the blockage, authorities resisted from making any communication.

The lack of direct communications quickly led to a spread in fake news. Marwa Elselsehdar, the first Egyptian female ship captain, faced allegations and false rumour online due to lack of accurate reporting on the cause of the incident.

Only until the Ever Given had been freed did Egyptian authorities make a direct statement. On March 29 President Abdel Fattah al-Sisi took to twitter to announce the crisis ‘over’. He gave thanks to citizen efforts, “Egyptians have succeeded in ending the crisis of the delinquent ship in the Suez Canal despite the tremendous technical complexity that surrounded this process from every side.” By only responding once the ship was free, this strategy refocused attention towards the success of the crisis management rather than the crisis itself.

The following day on 30 March, President Sisi visited the Suez Canal Authority and gave a speech commending its efforts to float the ship. Communications then shifted to a focus on development “We will open several ports as part of the development plan. We overcome challenges and crises with the awareness,” said President Sisi. The strategy was brief and direct with statements directly addressing the strengths of the crisis with a focus on future growth rather than reflection.

On 24 March, the Suez Canal Authority released a short video with dramatic music showing the vessel blockage. The video posted to YouTube included clips of workers attempting to free the Ever Given. The video was captioned “the team of Osama Rabie, head of the Suez Canal Authority, follows up on the rescue work and flotation procedures of the giant Panamanian container ship, Ever Given”. This was the first response from Suez Canal Authority officials and it acted as a way to confirm information that the ship was stuck in the southern convoy on a journey between China to Rotterdam. The video implies that the authorities were handling the crisis in a heroic mission.

As with the Egyptian President’s tweets, the video communications from Suez Canal Authority focused on the people involved in the rescue mission. Each video showed clips of planning, meetings and rescue efforts. These videos acted a source of information on the progress of the missions by using the video captions to update viewers. But the focus on the teamwork and dedication of rescue staff, worked to strengthen the authority reputation as an employee centred and efficient organisation.

There was a new video almost every day between 25 March and 2 April. The music shifts to a more upbeat tempo as the team makes progress and frees the ship on 29 March. In this celebratory video posted on 1 April, Egyptian flags and celebrating workers are shown to convey Egyptian pride and success. The most viewed video reached 187k views showing ‘the successful refloating of the Panamanian grounding container ship’.

Brands created social media posts making light of the Suez blockage after the container was eventually freed. One tweet from ESPN, Mercedes and Red Bull gained thousands of likes in reference to Lewis Hamilton and the on-going Formula 1 race. Mercedes also posted an Instagram photo that gained over 800,000 likes and achieved impressive consumer engagement. 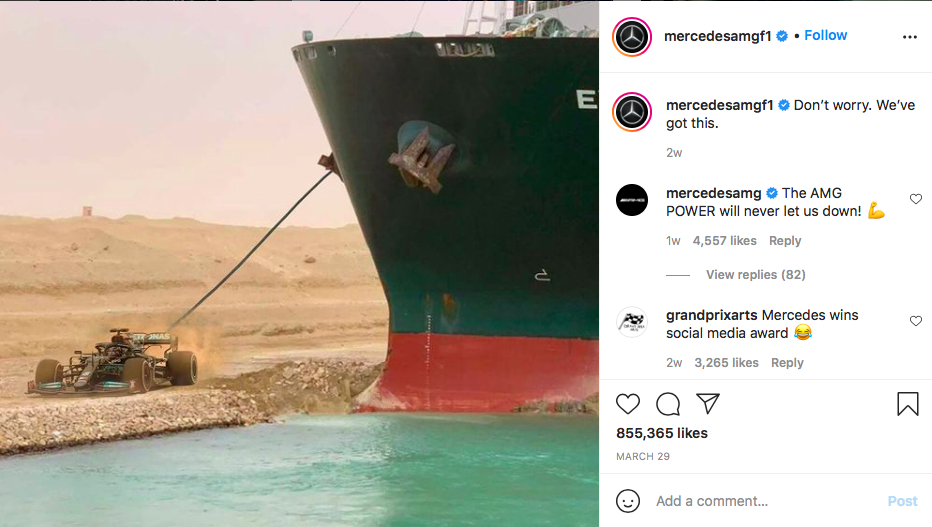 Indian dairy company, Amul, released a comical drawing with the headline ‘Issuez Resolved’ and the slogan ‘Amul, Ever Given for Taste’. The topical add went viral on social media platforms. Another example of internally created content was DBS India as they shared an animated image encouraging customers to ensure ‘your cash flow remains evergreen’. 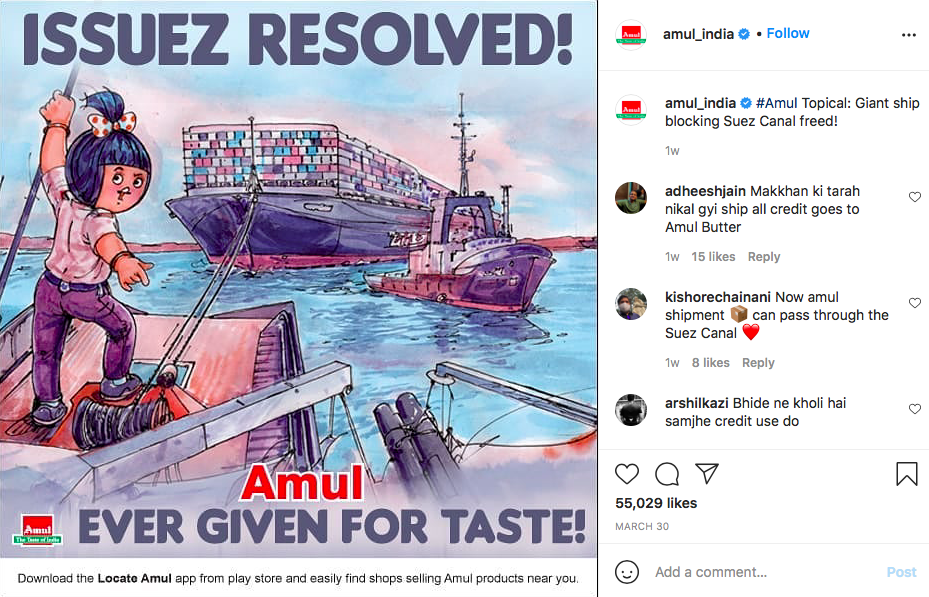 Other brands simply shared popular images circulating in the public with alterations to remain topical and enhance digital reach. For example the below image was shared by a travel company and a career-coaching organisation, but tweaked to fit the brand and appeal to their respective audiences. 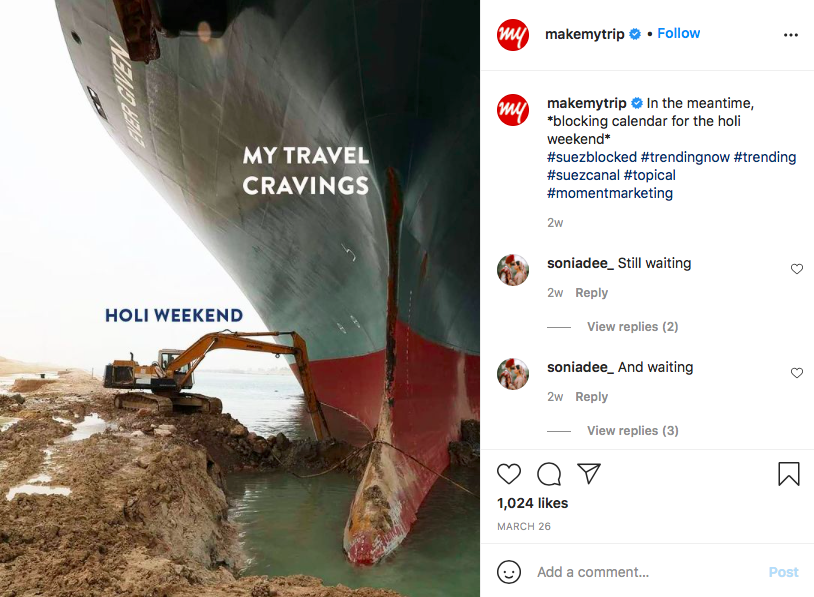 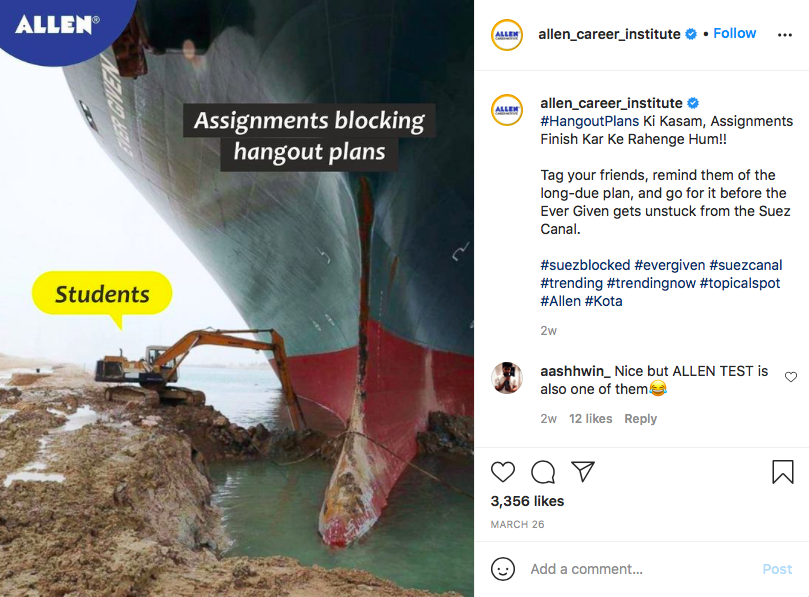 The Suez Canal blockage was a truly global and digital incident as crisis comms used video platforms and social media to inform on progress. Meanwhile brands that jumped on the news and shared tailored images with their audiences gained more interaction and engagement than the authorities at the heart of the incident.